I first heard of the book Unbeatable Mind when Mark Divine, the author, was interviewed on Ben Greenfield’s podcast.  Since then, I have followed his work on his blog and interviews.  He started his career in public accounting.  After realizing that the corporate world wasn’t the path for him, he took a leap and entered the Navy Seal, which he served for 9 years.  Since then, he has become a successful entrepreneur, founding Navyseals.com and launching US Tactical. He is also the author of three books.

I tend to be drawn to books that are about strengthening your mind because I think it is the largest component of success in every aspect of life.  Unbeatable Mind is about developing your personal power so you can enjoy success in your life.  This book touches on all aspects from challenging your physical body to meditation practices to character building. While this book is filled with a lot of really good information, I have summarized a few of my key takeaways below:

The points above are only a sliver of the content in the book.  Unbeatable Mind is chalk full of great information and I recommend it for anyone who is interested in bettering yourself.

The reason I read the The Autobiography of Benjamin Franklin is because Ben Franklin is Charlie Munger’s personal hero and he recommends reading anything by or about Franklin.  Charlie Munger is Warren Buffet’s partner at Berkshire Hathaway.  While he is the lesser known of the two, he is just as successful.

Benjamin Franklin was born in 1706 in Boston.  He first entered the printing industry as an apprentice for his brother in 1718.  He eventually opened his own printing house in Philadelphia in 1728 and became the owner and editor of the Pennsylvania Gazette in 1729.  Through the years, he published multiple pamphlets including the famous, Poor Richard’s Almanac.  He became more and more involved in public efforts and helped open a public library, a firehouse and the University of Pennsylvania.  He also was very involved in politics, being appointed to key roles, as well as conducted numerous scientific experiments.   He died on April 17, 1790.

While the above paragraph gives him zero justice, Franklin lived a very successful and busy life.  Here are a few things I got out of the book:

Reading books written in the 1700s is hard.  The writing is fancy (weird) and it takes some imagination to picture what you are reading.  However, I found Franklin’s life interesting mainly because his success came not only through learning and hardwork, but through his strong character. 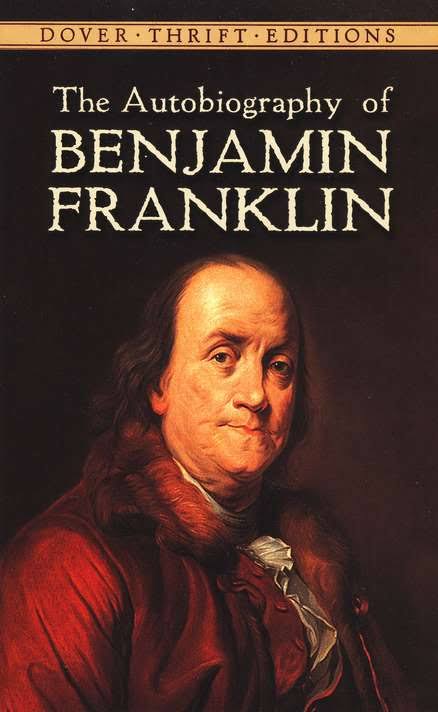 This book is a departure from my usual reads.  Why I decided to read Anthony Bourdain’s Kitchen Confidential: Adventures in the Culinary Underbelly, I do not really know.  Maybe because the newest season of Top Chef is on? Or it was free on Kindle Unlimited? Whatever the reason, I was instantly hooked by this book and thoroughly enjoyed his blunt attitude and crude stories.

This book, which was released in 2000, is about Bourdain’s career and the behind-the-scenes of restaurant kitchens.  Bourdain describes his not-so-straight path to becoming a successful chef, his personal bouts and weaknesses, including years of drug abuse, and many stories of what goes on in kitchen restaurants. He also provides some industry insight which is useful and entertaining for any restaurant-goer.  Here is what I learned:

This book was a very enjoyable read.  I am fascinated by the industry.  However, after reading this book, any dream of a second career in cooking has been thrown out the window.

I, just like most people, am not a morning person.  However, if you ask almost any successful person what their secret to success is, part of the answer will be attributed to waking up early and having a morning routine.  Because of this, I have been focusing on on getting up earlier and toying with my morning routine to optimize life.

I stumbled upon Hal Elrod on one of the podcasts I listen to where he was a guest speaker.  His book The Miracle Morning piqued my interest.  His story was very inspirational, and so I picked up his book.

Hal hit rock bottom twice in his life: once was when he got into a terrible car accident where he was actually pronounced clinically dead and the second was during the recession in 2007, when his income was cut in half and was under loads of debt.  While the first event seems worse, the second was his real rock bottom.  He fell into a deep depression, which drove him to experiment with and finally create his miracle morning.  By 2008, his life began to turn around and 2009 was his best year ever.  He attributes this turnaround to his miracle morning.

The purpose of this book is to utilize the miracle morning to create a level 10 life in all aspects of your life.  The majority of Americans live a life of mediocrity and end up settling whether it be financially, physically, mentally and emotionally or relationally (I know this is not a word).  Some of the reasons he attributes to living in mediocrity are:

So what is Hal’s miracle morning?  It is essentially a compilation of the most common things successful people do in the morning.  He calls it his life S.A.V.E.R.S.

The book goes through different strategies on how to develop and implement each S.A.V.E.R.

I have been experimenting with this in my mornings.  Personally, it feels overwhelming to incorporate all these things into my routine.  However, I will continue to experiment with it and likely narrow down the routine to focus on the items that have the largest benefit for me.

This book is a quick and inspiring read.  Even if you don’t walk away with the exact same framework in the book, there are plenty of tips to help optimize your morning.

Now that I am a world famous blogger (20 total followers…), I decided to read a book to up my writing game.  Bird by Bird by Anne Lamott is a book I purchased a few years back on a whim (probably to feed my bi-weekly Amazon purchasing addiction) but, once again, never got to reading.  Anne Lamott is a writer by trade.  She has had eight books published, been a past recipient of a Guggenheim and has been the book review columnist for Mademoiselle and restaurant critic for California magazine.  She has also taught writing at UC Davis and many other conferences throughout the state.

In this book, Lamott imparts the writing wisdom and advice that she has collected through her own experiences.  The book is filled with anecdotes and funny one-liners which makes it fun to read while still informative.  The book is moreso geared towards those who want to make writing a career.  There are a few chapters on subjects such as character development, scene development, etc that I glossed over since it is less than applicable to my once a week blogging.  However, I did find this book useful and want to apply some of her tips and instructions in my writing.  Here are my favorites:

In addition to these tips, Lamott shed some interesting light on the benefits that writing can bring:

While I am not likely the target audience for this book, I found it very useful and entertaining.  Writing can be very daunting but if you find subjects to write about that you are passionate about, you will engage yourself in satisfying work.

Ben Greenfield is one of my favorite fitness, health and wellness coaches.  I am a frequent reader and listener of his website and podcast.  He is a wealth of knowledge and his content is unconventional, but all backed by science and self-experimentation.  In 2013, he was nominated as one of the top 100 most influential individuals in health and fitness.

Greenfield’s book, Beyond Training: Mastering Endurance, Health and Life, is about achieving peak performance efficiently while still maintaining your health and not destroying your body.  The book is broken up into five sections: (i) fitness; (ii) recovery; (iii) nutrition; (iv) lifestyle and (iv) the brain.  He delves a lot into the science backing his findings and recommendations, but I tend to just gloss over those parts since I understand 0% of it.

Personally, I bought the book to learn ways to (i) build endurance; (ii) get stronger, faster and more flexible; (iii) recover better and (iv) achieve overall better health.  I also obviously want to keep it tight in a bathing suit.  While this book is packed with good information, what I found most interesting was the following:

These are a few of my favorite points from the book.  However, this book is full of very useful and new (to me) information and it will definitely serve as a reference for me in health and fitness.

The Selfish Gene is number two on Tai Lopez’s book recommendation list.   The book was first published in 1976 and is still relevant today, having sold over a million copies worldwide.

Science is not exactly my forte.   I never really liked biology class so I was a little weary of picking up this book.  Fortunately, Dawkins is able to explain many of his concepts and theories in lay terms and with many real-life examples, making it easier to read and understand.

Dawkins argues a gene-centered view of evolution versus being focused on the organism and species.  Dawkins argues that the predominant quality expected in a successful gene is selfishness.  Since all individuals and animals (which he calls “survival machines”) are created by genes, the genes will give rise to selfishness in individual behavior.

When Dawkins describes genes as being selfish, he moreso means that the genes that survive and get passed on are those that serve their own interest to continue to be replicated.   By bringing evolutionary dynamics down to the single gene, Dawkin rejects the idea that evolution is based on the social species.  Even in situations when a given organism seems altruistic, particularly amongst kin, it is acting in the interest of the genes.

Dawkins also delves into topics such as why there is still gene selfishness amongst kin; how survival machines decide on whether to bring children into the world; why there is conflict of interest amongst family generations and between sexes, and more.  He also introduces the concept of “memes” (which he coined) which are units, similar to genes, used to describe cultural evolution.

Dawkins clearly states that this book is not meant to be about morality.  Since, based on his theory, we are all born with selfish genes, we should try to teach generosity and altruism.  By knowing we are made up of selfish genes, we may have the chance to change their design.

sibreads
Create a free website or blog at WordPress.com.